There are two types of college students: The ones who save up for months so that when March comes around, they have enough money to hop on a plane to a place where they can twerk majestically on a beach, get hospitalized for alcohol poisoning, and other things that 20-somethings enjoy doing in order to make the most of their fleeting youth; and the ones who either don’t have money for all of that hedonism or just have no interest in it at all and would rather spend their spring break browsing Netflix in their undies while eating Frosted Flakes. If you fall into the latter group, then this guide is for you! Here are some of my movie recommendations for the couch potato on spring break. 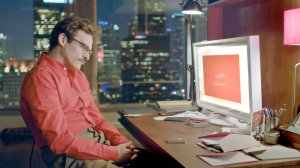 It’s been more than a month since Valentine’s Day, but if (for some reason) you’ve still got some discounted chocolate lying around and feel like watching something that’s a little sappy, Her might be the movie for you. The main character is Theodore, who is in love with his computer. Literally. The operating system, who names herself Samantha, can interact with people and convey emotions as if she were an actual human being. Eventually, she and Theodore become romantically involved. I recommend this movie because it’s not like your typical, Nicholas Sparks-two-young-kids-falling-in-love movie. It’s a romance with a sci-fi twist, and it’s great for anyone who’s a fan of the genre, but is looking for something a little bit different.

Chun-hwa was the leader of her group of friends in high school, but now she’s older and suffering from a terminal illness. She asks her friend Nami to help reunite the rest of their friends before she passes away. The movie alternates between the present day and the ’80s, when the main characters were in high school and had to deal with problems such as rival girl gangs, eyelid tape and glue sniffers. Sunny is amazing because it makes you laugh and cry. It is a South Korean movie, after all. Besides, doesn’t the title just make you think of spring?

Okay, this one’s a doozy. Remember the hedonism I talked about before? Take that, amplify it and you pretty much have Spring Breakers. What is this movie about? First, you’ve got four conventionally attractive college-aged girls who do a lot of drugs. Three of them commit armed robbery so that they can go to Florida for spring break and do even more drugs! More debauchery ensues, and at some point James Franco shows up with a grill and cornrows. This is one of those “so bad that it’s kind of good, disturbed, but can’t look away” movies. I recommend it because it’s great for when you don’t feel like watching something that makes you think. You can just sit back and watch this trashy, but entertaining, mess.