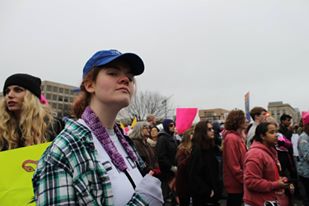 “The New York Times” estimates that nearly 500,000 people participated in the Women’s March on Washington on January 21, 2017. The march was a vibrant and very pink display of solidarity among advocates of various social causes. From reproductive rights to environmental concerns, demonstrators flooded the heart of the nation’s capital the day after the presidential inauguration to declare resistance against proposed and active legislation. Many Americans, whether they were present for the historic moment or simply heard the buzz, found themselves asking, “What’s next?”

Those who are curious about the answer may direct the question to young adults. Older generations are looking to the youth to carry the torch of political and social involvement, as they will greatly influence the trajectory of the country in the next years. With concerns about student debt, immigration, climate change and racial inequality, among others, the youth of America are recognizing social ills and undertaking the process of curing—or at least soothing—them within their means. One example of this is the Vine personality Kelvin Peña, who, after gaining a following for his videos, developed the Everybody Eats Foundation, dedicated to serving families in need. The name comes from a catchphrase he uses in videos that show him feeding neighborhood deer.

Students at NDMU are also interested in seeking positive change where they are, and some feel a sense of urgency. Janae Perry, an NDMU liberal arts graduate from the class of 2016, offered some insight on the recent changes in the political climate on campus. “I believe the political action has gone down since last year. I believe that safe spaces aren’t always enough in terms of action,” she explains. “There should be active demonstrations on our campus.”

Students are definitely expressing a strong desire to be more active. CJ Nwokeabia, a sophomore mathematics major, said, “I always hear a lot from [Tumblr]… I’m like, ‘Why didn’t I know?’ I feel like I’m in a bubble.” She shared a particular interest in on-campus initiatives to educate and mobilize students in the political sphere. She hopes to become better acquainted with local government, a sentiment shared with Perry. With the new year, new opportunities to get involved will arise for members of the NDMU community who haven’t already done so.