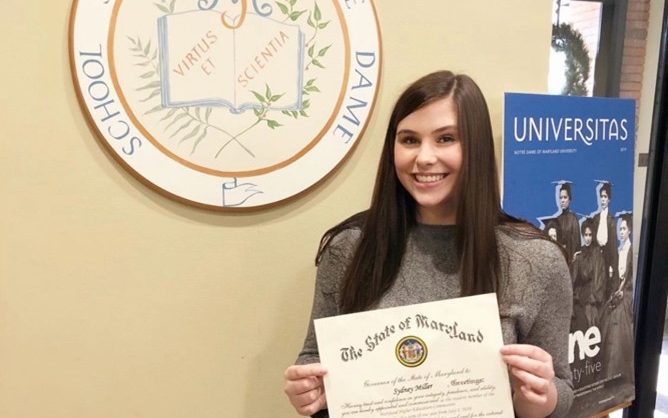 Columns explores the unique stories of community members because every gator has a tale.

Sydney Miller is no stranger to receiving prestigious collegiate awards. She is the Maryland Higher Education Counsel Student Commissioner. She is the single representative of all students who attend college in Maryland. She is also leading the Student Government Association at NDMU as President.

What you may not know about Miller is what she has overcome to make it here. Our meeting on zoom helped me to get to know Sydney Miller beyond her titles. We took a deep dive into her past.

She comes from a non-traditional upbringing. Miller stayed focused and driven despite having a difficult family life.  She used school and extra circulars as a way to escape her at home life. During this time, she fell in love with being involved in school. This helped to pave the way for the great things she would achieve later in her career.

“I think having non-traditional backgrounds makes you stronger,” Miller said.

Miller is a Baltimore native, having attended Loch Raven High school and is also a first-generation college student. “I knew I wanted to go to college, but I had to find my way independently,” she said.

She has always been forced into an independent role and has never wavered away from the challenge. Her senior year of high school she had her sights set on University of Delaware’s World Scholars Program. Although she was able to get into the prestigious program, she was not able to attend the University for financial reasons, which lead her to NDMU.

There were various reasons that Miller chose NDMU. First, they gave her terrific financial aid. Second, she was looking for somewhere where she could feel at home, and NDMU made her feel that way with the small and tight knit community. Now she says, “Notre Dame is my home, school is my home.”

She began her leadership roles her freshman year as a part of the Emerging Leaders Living Learning Community. This was the first step in her development of a stronger personal identity. She explained that college really helped her find herself and gain more discipline and focus.

During this self-exploration she found herself switching her major several times. Luckily, she had the help of her advisor to guide her on the path that fit her best. She went into college wanting to pursue English and biology. However, she changed her major to English as she began her freshman year.

She has had countless roles at NDMU that have been tied to her love for political science. She was the class council Vice President during her freshman and sophomore years. She served while having four jobs to be able to pay her tuition.

She also interned for Student Engagement and was a summer resident advisor. Moreover, she worked on Kamala Harris’ 2020 presidential campaign, which she considered one of the most important roles of her life.

You may be familiar with MHEC if you’ve received the Howard P. Rawlings Educational Assistance Grant or the Guaranteed Access Grant. Miller made a powerful suggestion to the Chair of the Council to create a Diversity, Equity, and Inclusion Committee and the motion was approved.

After college, Miller aspires to attend grad school and get her master’s in Public Policy. She would love to be a part of MHEC as a staff member after her year as Student Commissioner is finished. Miller’s dream job is to become Secretary of Higher Education. She is taking the steps towards that now by applying to Teach for America, where she hopes to pay forward what she has learned.

Meeting Miller was a pleasure, and she is a true inspiration for all NDMU students. She has shown all you need to do is “embrace the journey” as she says, “and you’ll go far.”